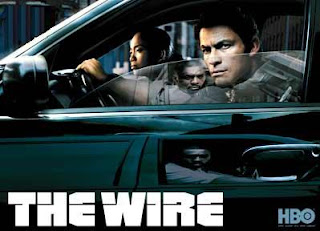 If there is one show with the strongest quotes
(and the most life lessons)
It must be The Wire.

For those that don`t know the show:
The Wire is an American television drama series set and produced in and around Baltimore, Maryland. Each season of The Wire focuses on a different facet of the city of Baltimore. In chronological order they are: the illegal drug trade, the seaport system, the city government and bureaucracy, the school system, and the print news media.

For those who haven`t seen the show: Start right away! It won`t dissapoint you.

If you wan`t to read the quotes: press the red button ( or you are already seeing them)

Carver: Girl, you can't even think of calling this shit a war.
Herc: Why not?
Carver: Wars end.

Pearlman: Let me understand. You're married and a date is a room at the Best Western with the blinds closed. Now you're single, and a date is you coming over unannounced to learn the legal requisites for a pager intercept.
McNulty: Pretty much.

Freamon: I don't wanna go to no dance unless I can rub some tit.

Bubbles: [to Kima] How y'all do what y'all do every day and not wanna get high?

Kima: You saw the murder?
Omar: Yeah.
Kima: You can ID this man Bird as the shooter of William Gant? And you ain't afraid
to go into court downtown and testify against one of Barksdale's people?
Omar: Omar don't scare

Bunk Moreland: So, you're my eyeball witness, huh? [Omar nods] So, why'd you step up on this?
Omar: Bird triflin', basically. Kill an everyday workin' man and all. I mean, I do some dirt, too, but I ain't never put my gun on nobody that wasn't in the game.
Bunk: A man must have a code.
Omar: Oh, no doubt.

Burrell: [to Daniels] You're not wrong, Lieutenant. In this state, there's a thin line between campaign posters and photo arrays.

Herc: What the f**k was that?
Carver: That was my Korean counterman.
Herc: Sounded Chinese.
Carver: Like you can f***ing tell the difference.

Avon: Ayo what's up playboy? How come you wearin' that suit, B? For real its 85 fuckin' degrees out here and you try'na be like fu***n' Pat Riley
Proposition Joe : Look the part, be the part, motherf***er.

Proposition Joe: I'm doing like one of them marriage counselors. Charge by the hour to tell some fool he need to bring some flowers home. Then charge another hour telling the bit** she oughta su** some co** every little once in a while. You know, keep a marriage strong like that.

Walon: Look, forgiveness from other folks is good, but ain't nothin' but words comin' at you from outside. You want to kick this shit, you got to forgive your own self. Love yourself some, brother. And then drag your sorry ass to some meetings.
Bubbles: Meetings?
Walon: What the f**k do you wanna hear? That you're strong enough to do this by yourself? Gettin' clean's the easy part. And then comes life.

Rawls: Listen to me, McNulty. You took a lot of risks. You played a lot of wild cards. And, you made a lot of fu***ng people do a lot of things they didn't want to do. You, McNulty, are a gaping a**hole. I know it, and I'll be fu***d if everybody in CID didn't know it. But I'll be also fu***d if I let you sit here and think you did a single fu***ng thing to get a fu***ng police shot. Believe it or not, not everything is about you. Get it into your head McNulty. It's not your fault. And the motherf***er telling you this, he fu***ng hates your guts. So you know that if it was your fault, I'd be the first son of a b***h to tell you. Shit went bad, she took two for the company. That's the only lesson here.

D'Angelo: If anybody asks you if in you in this game, you tell 'em you in it for life, a'ight?. You play it hard, you play it tight, and you make sure n***as know you gonn' stand by your people. No loose talk, no second thoughts and no snitching. Play it like that.

Clay Davis: Erv, will you explain to this motherf***er just what the f**k it is he's doing here?
Burrell: Lieutenant Dan-...
Daniels: [interrupting] Excuse me, sir, but it's pretty basic. If the senator isn't involved in anything illegal, then he doesn't need to worry. I can't be any clearer than that.
Clay Davis: Fool, what do you think? That we know anything about who gives money? That we give a damn about who they are or what they want? We have no way of running down them or their stories. We don't care. We just cash the damn cheques, count the votes and move on.

Daniels: [To Carver] Couple weeks from now, you're gonna be in some district somewhere with 11 or 12 uniforms looking to you for everything. And some of them are gonna be good police. Some of them are gonna be young and stupid. A few are gonna be pieces of shit. But all of them will take their cue from you. You show loyalty, they learn loyalty. You show them it's about the work, it'll be about the work. You show them some other kinda game, then that's the game they'll play. I came on in the Eastern, and there was a piece-of-shit lieutenant hoping to be a captain, piece-of-shit sergeants hoping to be lieutenants. Pretty soon we had piece-of-shit patrolmen trying to figure the job for themselves. And some of what happens then is hard as hell to live down. Comes a day you're gonna have to decide whether it's about you or about the work.